The Growth of Computing

By this point, you should be familiar enough with the history of computers to be aware of the evolution from the massive room-filling vacuum tube implementations of ENIAC, UNIVAC, and other first-generation computers to transistor-based mainframes like the PDP-1, and the eventual introduction of the microcomputer (desktop computers that are the basis of the modern PC) in the late 1970’s. Along with a declining size, each generation of these machines also cost less:

Not surprisingly, governments, corporations, schools, and even individuals purchased computers in larger and larger quantities, and the demand for software to run on these platforms and meet these customers’ needs likewise grew. Moreover, the sophistication expected from this software also grew. Edsger Dijkstra described it in these terms:

Edsger Dijkstra, The Humble Programmer (EWD340), Communications of the ACM

Coupled with this rising demand for programs was a demand for skilled software developers, as reflected in the following table of graduation rates in programming-centric degrees (the dashed line represents the growth of all bachelor degrees, not just computer-related ones): 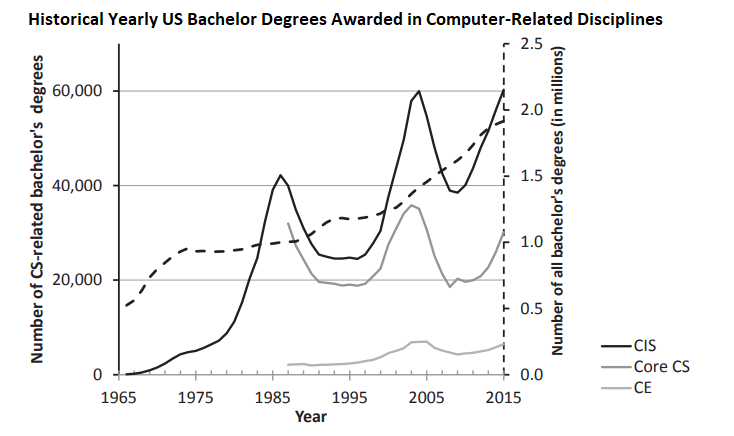 All of these trends contributed to what we now call the Software Crisis.