Class diagrams also express the associations between classes by drawing lines between the boxes representing them.

There are two basic types of associations we model with UML: has-a and is-a associations. We break these into two further categories, based on the strength of the association, which is either strong or weak. These associations are:

Is-a associations indicate a relationship where one class is a instance of another class. Thus, these associations represent polymorphism, where a class can be treated as another class, i.e. it has both its own, and the associated classes’ types.

Realization refers to making an interface “real” by implementing the methods it defines. For C#, this corresponds to a class that is implementing an Interface. We call this a is-a relationship, because the class is treated as being the type of the Interface. It is also a weak relationship as the same interface can be implemented by otherwise unrelated classes. In UML, realization is indicated by a dashed arrow in the direction of implementation:

Generalization refers to extracting the shared parts from different classes to make a general base class of what they have in common. For C# this corresponds to inheritance. We call this a strong is-a relationship, because the class has all the same state and behavior as the base class. In UML, realization is indicated by a solid arrow in the direction of inheritance:

Also notice that we show that Fruit and its Blend() method are abstract by italicizing them.

Has-a associations indicates that a class holds one or more references to instances of another class. In C#, this corresponds to having a variable or collection with the type of the associated class. This is true for both kinds of has-a associations. The difference between the two is how strong the association is. 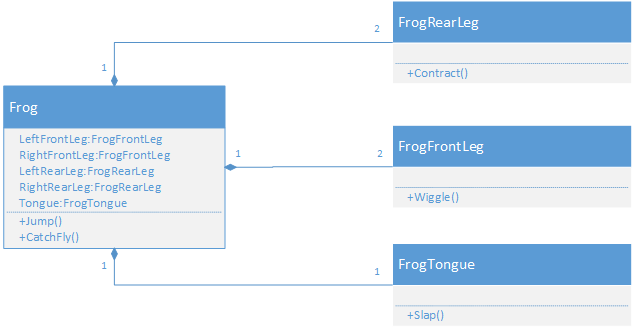 Aggregation and composition are commonly confused, especially given they both are defined by holding a variable or collection of another class type. An analogy I like to use to help students reason about the difference is this:

Aggregation is like a shopping cart. When you go shopping, you place groceries into the shopping cart, and it holds them as you push it around the store. Thus, a ShoppingCart class might have a List<Grocery> named Contents, and you would add the items to it. When you reach the checkout, you would then take the items back out. The individual Grocery objects existed before they were aggregated by the ShoppingCart, and also after they were removed from it.

In contrast, Composition is like an organism. Say we create a class representing a Dog. It might be composed of classes like Tongue, Ear, Leg, and Tail. We would probably construct these in the Dog class’s constructor, and when we dispose of the Dog object, we wouldn’t expect these component classes to stick around.

Multiplicities can also be represented as a range (indicated by the start and end of the range separated by ..). We see this in the ShoppingCart example above, where the count of GroceryItems in the cart ranges from 0 to infinity (infinity is indicated by an asterisk *).