At the heart of the world wide web is the Hyper-Text Transfer Protocol (HTTP). This is a protocol defining how HTTP servers (which host web pages) interact with HTTP clients (which display web pages).

It starts with a request initiated from the web browser (the client). This request is sent over the Internet using the TCP protocol to a web server. Once the web server receives the request, it must decide the appropriate response - ideally sending the requested resource back to the browser to be displayed. The following diagram displays this typical request-response pattern. 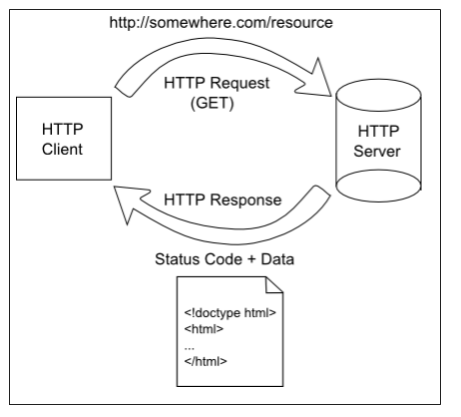 This HTTP request-response pattern is at the core of how all web applications communicate. Even those that use websockets begin with an HTTP request.

A HTTP Request is just text that follows a specific format and sent from a client to a server. It consists of one or more lines terminated by a CRLF (a carriage return and a line feed character, typically written \r\n in most programming languages).

Similar to an HTTP Request, an HTTP response consists of one or more lines of text, terminated by a CRLF (sequential carriage return and line feed characters):

With our new understanding of HTTP requests and responses as consisting of streams of text that match a well-defined format, we can try manually making our own requests, using a Linux command line tool netcat.

Open a PowerShell instance (Windows) or a terminal (Mac/Linux) and enter the command:

Alternatively, you can us Putty to connect to cslinux. Detailed instructions on both approaches can be found on the Ccompute Science support pages.

If you are connecting from off-campus, you will also need to connect through the K-State VPN to access the Computer Science Linux server. You can find more information about the K-State VPN on the K-State IT pages

The $ indicates a terminal prompt; you don’t need to type it. The [eid] should be replaced with your eid. This should ssh you into the CS Linux system. It will prompt you for your CS password, unless you’ve set up public/private key access.

Once in, type the command:

The nc is the netcat executable - we’re asking Linux to run netcat for us, and providing two command-line arguments, google.com and 80, which are the webserver we want to talk to and the port we want to connect to (port 80 is the default port for HTTP requests).

Now that a connection is established, we can stream our request to Google’s server:

Note that you need to press the return key twice after the GET line, once to end the line, and the second time to end the HTTP request. Pressing the return key in the terminal enters the CRLF character sequence (Carriage Return & Line Feed) the HTTP protocol uses to separate lines

Once the second return is pressed, a whole bunch of text will appear in the terminal. This is the HTTP Response from Google’s server. We’ll take a look at that next.

Scroll up to the top of the request, and you should see something like:

The first line indicates that the server responded using the HTTP 1.1 protocol, the status of the response is a 200 code, which corresponds to the human meaning “OK”. In other words, the request worked. The remaining lines are headers describing aspects of the request - the Date, for example, indicates when the request was made, and the path indicates what was requested. Most important of these headers, though is the Content-Type header, which indicates what the body of the response consists of. The content type text/html means the body consists of text, which is formatted as HTML – in other words, a webpage.

Everything after the blank line is the body of the response - in this case, the page content as HTML text. If you scroll far enough through it, you should be able to locate all of the HTML elements in Google’s search page.

That’s really all there is with a HTTP request and response. They’re just streams of data. A webserver just receives a request, processes it, and sends a response.