So now that we’ve seen HTTP Requests in action, let’s examine what they are. A HTTP Request is just a stream text that follows a specific format and sent from a client to a server. 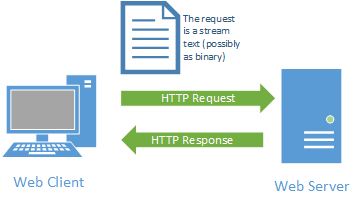 It consists of one or more lines terminated by a CRLF (a carriage return and a line feed character, typically written \r\n in most programming languages).

The request-line follows the format

The Method refers to the HTTP Request Method (often GET or POST).

SP refers to the space character.

The Request-URI is a Universal Request Indicator, and is typically a URL or can be the asterisk character (*), which refers to the server instead of a specific resource.

HTTP-Version refers to the version of the HTTP protocol that will be used for the request. Currently three versions of the protocol exist: HTTP/1.0, HTTP/1.1, and HTTP/2.0. Most websites currently use HTTP/1.1 (HTTP/2.0 introduces many changes to make HTTP more efficient, at the cost of human readability. Currently it is primarily used by high-traffic websites).

Finally, the CRLF indicates a carriage return followed by a line feed.

For example, if we were requesting the about.html page of a server, the request-line string would be:

Header lines consist of key-value pairs, typically in the form

Headers provide details about the request, for example, if we wanted to specify we can handle the about.html page data compressed with the gzip algorithm, we would add the header:

The server would then know it could send us a zipped version of the file, resulting in less data being sent from the server to the client.

If our request includes a body (often form data or a file upload), we need to specify what that upload data is with a Content-Type header and its size with a Content-Length header, i.e.:

The header section is followed by a blank line (a CRLF with no characters before it). This helps separate the request metadata from the request body.

The body of the request can be text (as is the case for most forms) or binary data (as in an image upload). This is why the Content-Type header is so important for requests with a body; it lets the server know how to process the data. Similarly, the Content-Length header lets us know how many bytes to expect the body to consist of.

It is also acceptable to have no body - this is commonly the case with a GET request. If there is no body, then there are also no required headers. A simple get request can therefore consist of only the request-line and blank line, i.e.: